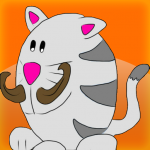 I have been trying to come up with a good post about video game making for a while. I am by no means a well known developer. I am not even sure I am an indie developer… not yet. But then again maybe I am.

Making a video game is hard. The main reason is deciding what you want to get across with your game. This is made harder by the fact that casual gaming has created a hole in gamings heart. A hole that seems to be filled with casual gaming. I love casual gaming; the quick gameplay and time wasting mechanics, but I miss the stories and difficulty that older generation games had.

Even older games that had a simple story, Super Mario Bros. for exemple, where hard. Personally I have never beaten Super Mario Bros. without using warps. Part of this is because I am not that good at platformers and part of it is that the game is hard. Sarah has destroyed Super Mario Bros. numerous times and I really enjoy watching her play.

When I set out to make Falling Cats(then called Cat Catch) I poorly drew the graphics and put it together in GameSalad in a couple afternoons. I had a story in mind but couldn’t figure out how to get it into the game in a way that felt natural. Since Falling Cats is a casual game I made the decision to cut that out of the finished game. I like to say that it is because the game didn’t need it but it is more likely that I just couldn’t get it to fit into the game correctly.

Moving forward I am attempting to put together a solid team for the next game. i have a dude that is a great concept artist and is going to try his hand at sprites. I am still going to be the developer(unless I find someone to do it) and Will will be doing the music. Now I just need to get started on the build.

But as I stated earlier… making video games is hard. Managing my time between everything else and game making is a real pain in the ass. Hopefully I get a really bare bones prototype running soon and I will show it here. Meanwhile… have you tried Falling Cats.