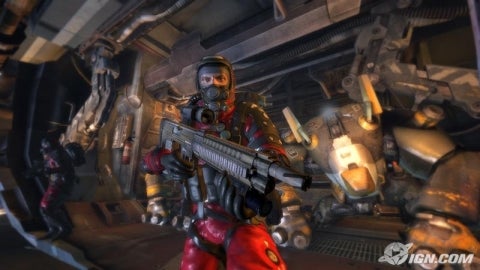 I was as surprised as you when I read the news. Bionic Commando the coolest platformer with a bionic solider is being remade as a next generation console game. Finally. I have to say that I was really bad at the original Bionic Commando, though it has been a long time since I have played it.

It appears that in the new game a group of terrorists have laid waste to some fake city and it is your job to bring them down using all of your bionic glory. Basically they are making another shooter that involves some interesting gimmick, a bionic arm.

Hopefully they do a good job making this game and don’t make it suck to bad. I find it frustrating that every third game that comes out is some type of shooter. This is because people keep buying them and they make a lot of money. Take Halo 3 for instance, it was a good game but it wasn’t the best game ever, in fact I can think of at least three games that I enjoyed more and weren’t so disappointing at the end.

I think what Bungie needed to do is just release Halo 3 as a multi player game like Shadowrun, since all any hardcore Halo-ite cares about is the multi player system. The story they finished was so lame and I felt extremely let down by the last level, a road course of not killing the bad guys.

What I am saying to you, the remaker of Bionic Commando, is that if this game is good it had better be because of the story and game play and not because you came up with a new, and by new I mean the same as Halo, way of doing multi player. Please take the time to make a good story, make coop play a big part of the game with each person being a distinct character. Also make it so there are multiple bionic systems that you can upgrade.

Good God Mario is so cool. I am happy